Our Heritage In Pictures

Our church has always grown since in organization in 1890.  The new 1949 Sanctuary served members well until 1994 when the Church Council approved an expansion of that church building.  They added several pews in the back of the church and then added a much needed Narthex for entry, bath room, storage and a grand piece of stained glass on the street side of the church.  Entries are on the east and west of the church.  A poured parking lot was also added at that time 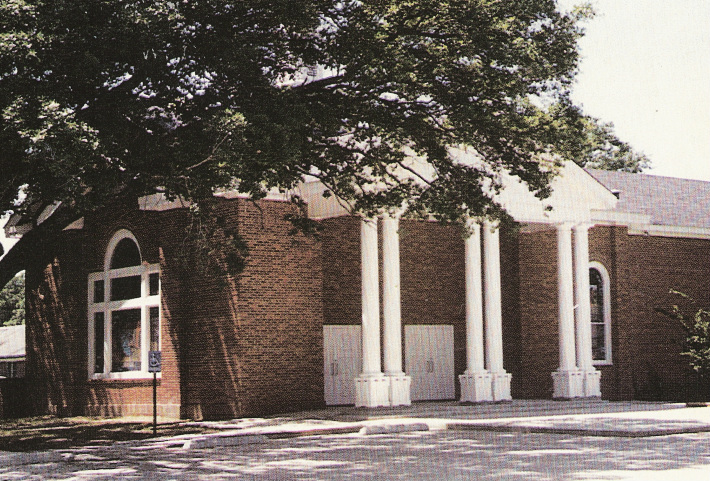 A Look Back at Our History
Article by Margaret Harmon, ZUMC Historian & Archivist

The Yazoo & Memphis-Vicksburg Railroad built a station in Zachary, LA in 1884.  This brought commerce and people to this small settlement.  The location of the railroad had a tremendous effect upon the membership of the Pipkin Chapel Church, serving Baker, Zachary, Port Hudson and the Plains.  Citizens had additional worship options once the railroad built a permanent station in Zachary. The drop in participation made the membership of Pipkin’s Chapel to begin thinking of disbanding the church.

Zachary was named for the man who sold a strip of land, fifty feet wide, east and west by 650 feet long, north and south to the Louisiana-New Orleans & Texas Railroad.  When the station was completed, railroad officials said, “We will call it the Zachary Station.”  When the railroad was finished and the first train came through Zachary, people came in wagons, buggies and carriages, and even on foot for miles around to see the train.  A road was cut from the Plains area to the Zachary Station.  The area was mostly wilderness at the time.  During the rainy season travel was almost impossible.  It was a difficult trip for wagons during those early days.

In the spring of 1889, news from the community of Zachary reported something unusual was happening in the home of Mrs. Sanford.  The word was they were holding religious services in her living room.  By summer local and area folks built an arbor roofed with brush.

The September 27, 1956, Zachary The Plainsman reported, “The young boys from miles around came on their ponies to see what was going on”, remembers Henry Epperson of Baker.  “Some men were there and they were planning to build a brush arbor.  We boys stayed on to work with them.  Ten boys were assigned to each man and we worked with all day building the arbor.”

“Smiling, Epperson recalled “At noon the women of the community brought out all the chicken we boys could eat – and that was a lot of chicken!  As I remember it”, he continued, “the arbor was roofed with brush.”  Jimmy Whitehead of Zachary remembers that the brush was actually palmetto leaves.  Mrs. Luther Roberts of Zachary, who worshipped in the arbor when it became a church, remembered the structure as having been made permanently roofed with palmettos.

“With a neck like a crane and a face that he could make as ugly as sin,” Noel Norwood, a young “free-lance” Methodist preacher of whom very few facts are known, left his imprint over one-hundred years ago on the town of Zachary.  Cole Black of Deerfield reported Noel Norwood was “a tall, lanky man who could lean over a congregation and, with a horrible grimace convince his listeners of the terrors and reality of sin simply by his appearance.  Norwood is credited with having started Methodism at Zachary in 1890.

The small village of Zachary, Louisiana was incorporated in August 2, 1889.   Pipkin’s Chapel, the nearest Methodist church at that time, was some six miles away.  To reach that church citizens had to travel dirt and gravel roads by horse and buggy.  A group of local God-fearing citizens in this new community wanted to develop its own Methodist Church to avoid the treacherous journey on the old Bayou Sara Road (now known as Old Scenic Highway or Hwy. 964) for worship.

Over one-hundred twenty years ago, a core group of Zachary Methodist declared their mission to build their own church locally.  Zachary Methodist Episcopal Church, South was organized under a brush arbor on the very ground on which we worship and enjoy fellowship today.  Rev. J. T. Legett was appointed the first minister and a permanent structure was completed in 1891.  Soon after the completion of the church, a parsonage was built.

Many men and women generously gave of themselves towards the betterment of our church and community from the beginning of Zachary Methodist Church.  These are the people who supported the church to survive the trauma of two World Wars in the first half of the twentieth century, a police action in Korea in the early 1950s, and another generation experienced the long Viet Nam War era.   Yet another generation of fine God fearing young men and women of our church now serve selflessly to preserve our freedom by serving conflicts in Iraq and Afghanistan.

Our ancestors and early leaders of our church also fought a yellow fever epidemic, rebuilt their church from the ashes of the tragic fire of 1914 and struggled through the Great Depression in the 1930s.  In 1968 the Methodist denomination united with the Evangelical United Brethren and the official name of our church became Zachery United Methodist Church.   While enduring hardships dedicated members planned, financed, and fashioned the growth of our church.  Through all these difficulties our members kept their faith in God and worked to continue and improve our church for today.

Due to the passage of time and the lack of records, pertinent information was not available in regards to the pastors prior to 1911, with the exception of Rev. J. T. Leggett. Shortly after moving to Zachary to serve this church, he married Kate Bruce Brown of Woodville, Mississippi on August 5, 1891 with Rev. T. W. Brown, the bride’s father, officiating.  The church built them a parsonage shortly after they married.  Rev. Leggett left the Louisiana conference after serving Zachary Methodist Episcopal Church, South and went to the Mississippi conference where he became a District Superintendent of several districts.

In 1911, the Rev. J. D. Harper came to Zachary and served three churches at the same time – Ethel, Slaughter, and Zachary.  At that time, many passenger trains were arriving and departing Zachary.  Rev. Harper would board at Zachary, go to Ethel and preach, board another train and go to Slaughter for another service, and then still another back to Zachary in time for a 3:00 p.m. message.

Rev. J. J. Kelly served our church in 1916-1917, but his license to preach was revoked by the Bishop in 1917.  Charges were brought against him concerning domestic problems and a trial conducted at the local church.  Rev. Kelly liked to tell everyone that he had 7 daughters and each one of them had a brother.  This meant that he was the father of 8 – not 14.

Rev. and Mrs. J. H. Bowden arrived in Zachary in 1925 as a newly married couple. J. H. Bowden served our people for only one year but made many lasting friendships during this short period.  Rev. Bowden later became a District Superintendent in the Methodist Church.

Rev. Harry M. May was pastor in 1926.  He died in Zachary and was buried here in 1931.  His grandson donated his Bible, a photograph, his preaching certificate and two handwritten documents for our files.  These items are on display in the Heritage Room.

Originally organized as Zachary Episcopal Church, South it was renamed to Zachary Methodist Church in 1939 and in 1968 it became Zachary United Methodist Church.  We worship Jesus Christ and enjoy the fellowship of Christian membership just as the early members of the church did under the Brush Arbor. May we learn from our past, anticipate our future, and grow in the name of Jesus Christ.

Based on information from the following sources
September 2011